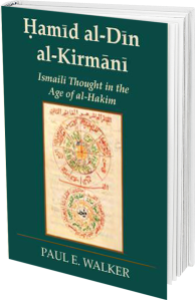 Hamid Al-Din Al-Kirmani: Ismaili Thought in the Age of al-Hakim by Paul E. Walker (I. B. Tauris, 1999)
Review by Ahmad Amirali

In this book, Paul E. Walker introduces the major works of an Ismaili scholar Hamid al-Din Abu’l–Hasan Ahmad b. ‘Abdallah al–Kirmani. Al-Kirmani from the time of Imam-Caliph al-Hakim bi-amr Allah. (996-1021). He was a cutting edge of the intellectual advances of his time and almost aligned with the famous Ibn Sina, with whom he shared many mystical and philosophical ideas. Al-Kirmani’s ideas on the human intellect and the order of creation are the aperture those expressed by early Ismaili thinkers which he endeavoured to amend, thus providing insights into to initial Ismaili debates about philosophical and scientific concepts.

Al Kirmani role in the da’wa (the teaching and evangelising organ of the Ismaili movement) was significant as he was invited to Cairo by the Imam-Caliph to assist him in clarifying many points in the Ismaili doctrine which had fallen into obscurity. He faced many challenges in interpreting faith within the da’wa. According to al-Kirmani, when he reached Cairo, he describes the atmosphere of Cairo as ‘dark and pervasive clouds’. He wrote, “When as an immigrant [muhajir] I reached the Prophetic Presence, … I beheld there a sky that had become dark with pervasive clouds, the people under the weight of great tribulation, the observance of previous practices had been cancelled, and the faithful saints were kept from what they had earned” (Walker, 1999, pg17).

Al-Kirmani wrote many books mainly on philosophy and theology, despite that, the world has a very little information on him. According to Walker (1999), al-Kirmani made a vital contribution to both Islamic and the da’wa work. He states, “Al-Kirmani was a forceful, intellectually gifted apologist for al-Hakim, one who never failed to advocate and defend his imamate, … Also, al-Kirmani’s, scholarly accomplishments and knowledge were a match for any of his contemporaries, including possibly the philosopher Ibn Sina” (Walker, 1999, pg03).

As discussed above al-Kirmani recognised for his contribution to the Ismailia da’wa work. However, he is also known for his work in scientific, theological and philosophical discourse during the time of al-Hakim period. He translated many philosophical works in a form which benefit many scholars.

In the opening of the book, Paul E. Walker describes the circumstances in which al-Kirmani arrived in Cairo on the invitation of Imam al-Hakim. He also explains the political atmosphere and the challenges incurred by al-Kirmani after his arrival to Cairo. In a later chapter, Walker confers al-Kirmani works in their historical context, and the problems faced by him in establishing the authenticity of his work that includes the chronology of his work as well.

The hierarchy of the da’wa and its framework discussed in the third chapter of this book. This chapter also provides the necessary discourse on the role of each da’i (Ismaili preacher) played in the da’wa movement. In this chapter, Walker even tries to constitute al-Kirmani’s sources and how these sources differ from other da’is like al-Sijistani.

The chapter four of the book discussed al-Kirmani’s doctrine on ‘Double Observance’, according to which both knowledge and work characterised true faith. The essential question “What is Faith?” has been raised again and again in the book establishing it as an important theological question throughout history. Walker raises and discussed al-Kirmani’s doctrine in a highly lucid and detailed manner. Walker further describes that the heart of Islam is the principle of Tawhid (Oneness of God) and thus, according to al-Kirmani, faith must be based on an ultimate understanding of this principle.

In the final chapter, Walker points out that the philosophical work of al-Kirmani has appeared to be much closer to Ibn Sina and al-Farabi rather than al-Sijistani. I believe the reason for Walker’s inclining towards al-Farabi and Ibn Sina than al-Sijistani could be their philosophical pathways. Al-Sijistani was an absolute Neoplatonist whereas al-Farabi and Ibn Sina combine Neoplatonic theory with peripatetic philosophy. Another reason can be found in Appendix A of the book “Al-Kirmani and Philosophers”. In this Appendix, Walker discusses an interesting relationship between al-Kirmani and Ibn Sina. Ibn Sina father was an Ismaili and, as Ibn Sina mentioned in his biography, he did not find Ismaili doctrine resounding enough. Walker interestingly points out the influence of Ibn Sina’s symbolic essays upon al-Kirmani’s rahat al-‘aql. Al-Kirmani symbolically wrote rahat al-‘aql, the whole book is “the City of God and each chapter is divided into walls which themselves lead to pathways” (Walker, 1999, p. 105).

By reading the book, the reader might have raised some questions like what was the extent of al-Kirmani’s work over later Ismailism? Or How influential was al-Kirmani’s rahat al-‘aql on later Ismaili thought? However, Walker does not address such questions in his book, perhaps, as he mentioned in the purpose of the book is to bring to light the works and importance of an Ismaili thinker.

Hamid Al-Din Al-Kirmani: Ismaili Thought in the Age of al-Hakim by Paul E. Walker is an ultimate resource for anyone who wants to have an overview Imam-Caliph al-Hakim’s reign and the philosophical and theological atmosphere at that time. Al-Kirmani’s during his stay at Cairo deals with many challenges which are still relevant in the contemporary time such as, the need for the living Imam, the balance between zahir and batin, the authority of Imam and the need to have an intellectual understanding of concepts fundamental to the faith.